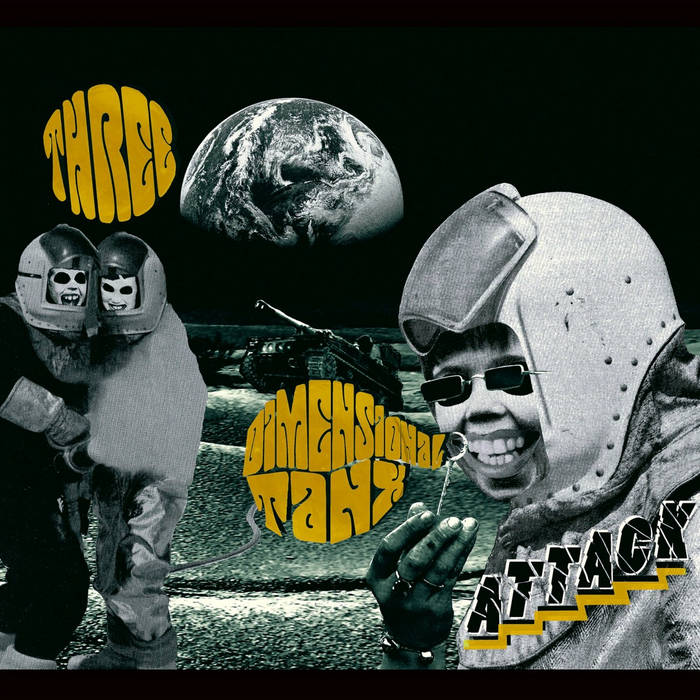 
'they sound like they are having the time of their life...like the Saints doing battle with Stooges...the songs snarl, spit and bite but are drenched in almost pop sensibilities...delivered with such energy, urgency and aplomb'

‘a glorious cranium compressing collision of muscular kraut, weird ear prog and space psych all of which we here have found ourselves somewhat adoring of the albums parting track and, dare we say, aptly titled ‘Astral Plane flight attendant’ which by these ears sounds like a hulking melodic mushroom forged of a sci-fi-tronic silver age key swirled hallucinogenic psyched out pop pill found warp driving through a meteor storm.’

‘Making you feel better by channelling your aggression, the guitar fuelled Psych-Rock of Three Dimensional Tanx needs plenty of volume to be fully appreciated, their blend of The Heads, Spacemen Three and The Stooges getting more potent on each release with their latest album ‘Attack’ the proverbial icing on the cake, containing twelve slices of prime head music, noisy guitar and sixties organ writhing together over a solid bed of rhythm. As the band power through the album it is hard to pick out individual songs as the riffs just keep coming, but highlights for me include the fairly frenetic ‘Hotdog’ , the guitar fenzy of ‘Scene Not Herd’ and the final six minute blow-out of ‘Astral Plane Flight Attendant’ a trippy organ lighting the way for some lysergic grooves and quite possibly outbreaks of idiot dancing, great stuff and an album that grows on you, which is always a good thing.’

‘Lancaster’s very own garage-punks of psych appear to be kicking against the pricks…The Stooges for the real ale age have smashed it up.’

‘Their sound is an appealing mixture of psych, punk, garage, space-rock – all things Shindig!…they paint in bright colours’

‘With an inventive approach that combines indie rock with psychedelia and a touch of 70s Krautrock, sci-fi obsessed Lancaster band Three Dimensional Tanx fill their fourth album with tunes that can be sharp, upbeat, lax and hazy and sometimes manage to be both at once. For lovers of music driven by retro organ work, its’ a recording that needs to be heard, since the engergy these guys sum up is really impressive.’

’112 seconds. That’s all this song takes to start and finish but it’ still better than everything in the charts these days. ‘Son of Go’ kicks in with a circular guitar riff and is soon followed by some Doors-esque organ work and the kind of drumming Keith Moon would have been ripping out in his prime.’

‘‘Son Of Go’ sees shards of fuzzy guitar clutter our worldview, it’s knees up time. It’s a riff familiar from The Fall in their rockabilly days, let’s say ‘Cruisers Creek’ -ish. Fairground organ parps as hands clap. And then just as you’re getting into the swing of things it’s over. At under 2 minutes this reinforces the band Wire-esque brevity, jutting roughly against the psych longueurs of five-minute intros. ‘Son Of Go’ comes from the corner of the ring throwing punches.’

All songs written, arranged and performed by three dimensional tanx.

Bandcamp Daily  your guide to the world of Bandcamp